'The Lalique Garden forms an outside dining room where the rich burgundy and plum coloured foliage plants add a luxurious feel. It really personifies the notion of a chic garden.'
Andy Sturgeon
Garden Designer &television presenter

'Another garden that works brilliantly for entertaining, is the Lalique garden. This garden is all about plush opulence. Everything here is rich and dark and very expensive. This table is made of solid crystal and costs £60,000. The plum coloured planting picks up on the colour of the chair covers. It's meticulously planted and a garden that is very powerful and makes a bold statement.'
Rachel de Thame
Garden Designer &television presenter

The one thing that black does in a garden is to create a very strong mood, and here, on the Lalique garden, it creates a feeling of opulence, of decadence and luxuriousness. And the one thing that does it for me is the planting. And the Zantedeschia 'Black Star' is a single plant that sums up this garden in one flower.'
Joe Swift
Garden designer &television presenter

'The garden which said it all was a tiny jewel, the Lalique Garden, a gold medal- winning chic garden. Inspired by the gardens of ancient Persia, designer Shahriar Mazandi used panels made from the original Lalique casts which were designed for the Pullman carriages of the French president and appeared in the film Murder on the Orient Express, and a glass table by Lalique's son Marc.'
Irish Post

'This year's 'big new thing' in terms of colour is black. At the Chelsea Flower Show I really loved the Lalique Garden which went mad on all those colours. It looked like a patio dining room, such as you would see at a very exclusive restaurant. ... It looked fantastic.'
Charlie Dimmock
for The Mail on Sunday 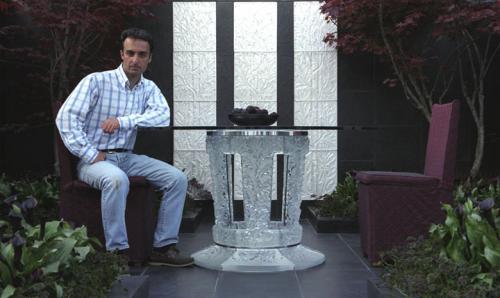